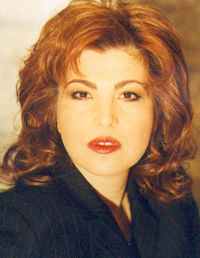 Mary Souli was born in Crete and studied Marine and public relations in England.
After the death of her father took over the company Cel Tours.
Under the direction of the company launched new destinations in the Greek market, original programs based in high class hotels and excellent services.
Due to the increased movement of Greeks to Thailand and generally towards the East Asia Tours Cel company founded the company based in Bangkok, as well as company based in Phuket Island of Thailand.
The company directs the travelling public to new destinations in and outside Asia, countries such as Argentina, Brazil, Peru, Central America countries. America, Caribbean Islands, Cuba, Africa, Oceania.
ასევე, offers the traveler long and dream trips with affordable prices compared to services offered.
For her contribution to the field of tourism has been awarded twice by the national tourism organisation of Thailand in 1996 და 1998 and have been awarded the titles of honorary Tourism Ambassador of India and China.
in 2002 she was given the title of the woman entrepreneur of the year award by the magazine “Epsilon”. Last awarded the title of Cultural Ambassador for communication between Greece and Mongolia.