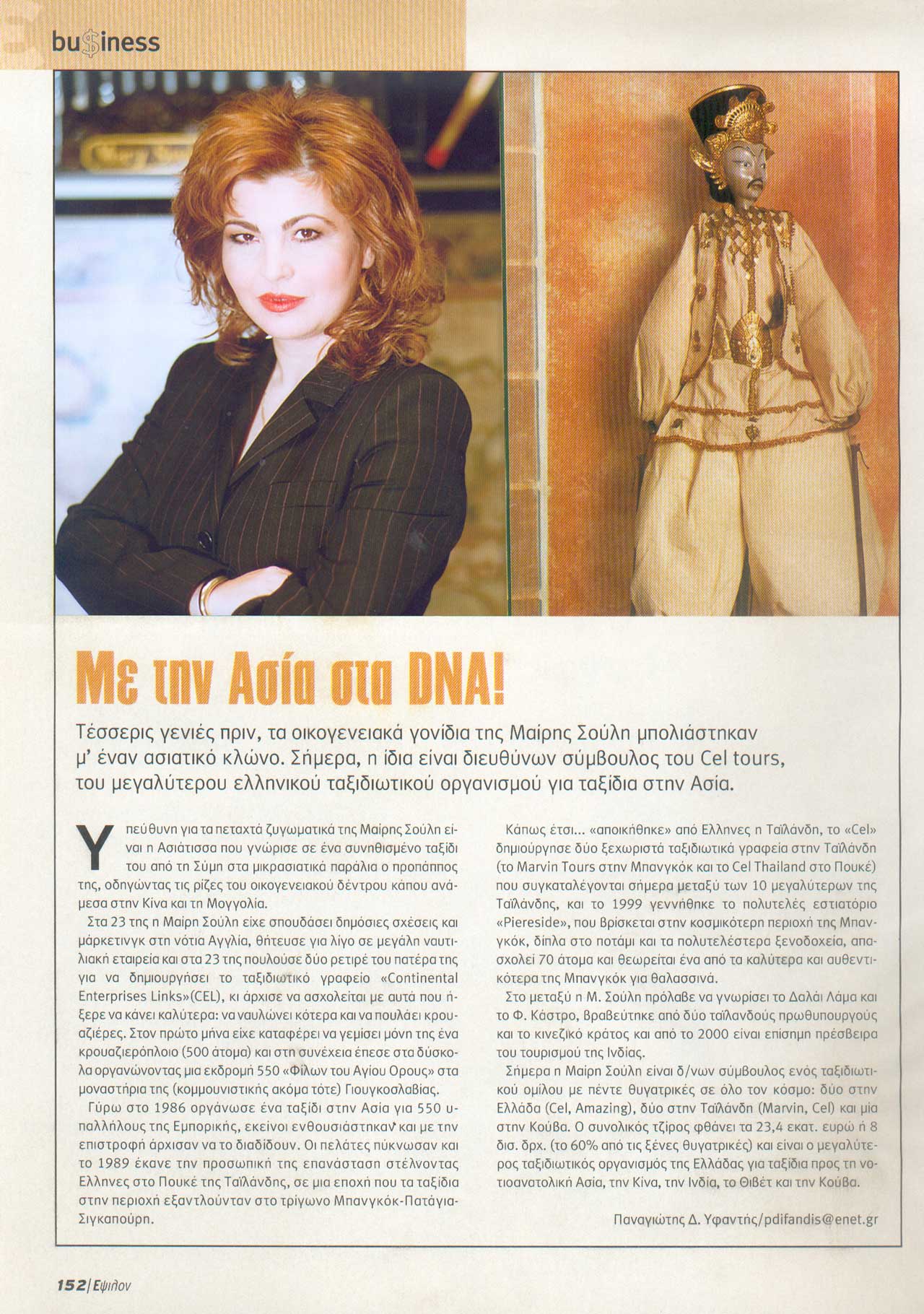 Four generations ago, the family genes of Mary Souli were grafted with an Asian clone.
დღეს, she is Chief Executive Officer of Cel tours, the largest Greek travel agency for travel in Asia.
Responsible for the prominent cheekbones Mary Souli is Asian that met in a usual trip from symi in the coasts of the great-grandfather of leading its roots family tree somewhere between China and Mongolia.
in 23 of the Mary Souli had studied public relations and marketing in southern England, he served for a while in a large shipping company and in 23 of sold both her father’s penthouse to create the travel agency «Continental Enterprices Links “(CEL), and started to deal with what they know to do best: Charter yachts and sells cruises.
In the first month had managed to fill only one cruise ship (500 ადამიანი) and then fell in difficult organizing an excursion 550 “Friends of Mount Athos monasteries” (Communist yet then) Yugoslavia.
Around 1986 he organized a trip to Asia for 550 employees of the trade, those were thrilled and the return began to spread. Pyknwsan customers and the 1989 did her personal revolution sending Greeks to Phuket of Thailand, at a time when traveling under the exhausted triangle Bangkok-Pattaya-Singapore.
Something like this … “it was colonized by the Greeks” Thailand, “Cel” created two separate travel agents in Thailand (Bangkok and Phuket) listed today among the 10 largest in Thailand, and in 1999 was born the upscale restaurant “Piereside”, located in the more secular area of Bangkok, next to the river and the most luxurious hotels, employs 70 people and is considered one of the best and more of Bangkok for seafood.
In between the m. Souli he met the Dalai Lama and f. Castle, awarded by two Thai Prime Ministers and the Chinese State and since 2000 is the official tourism Ambassador of India.
Today Mary Souli is ceo of a travel group with five subsidiaries worldwide: two in Greece (Cel, Amazing), two in Thailand (Marvin, Cel) and one in Cuba.
The total turnover up to 23.4 მილიონი. Euro or 8 billion. Drs. (60% of the foreign subsidiaries) and is the largest travel agency in Greece for trips to Southeast Asia, China, ინდოეთში, Tibet and Cuba.