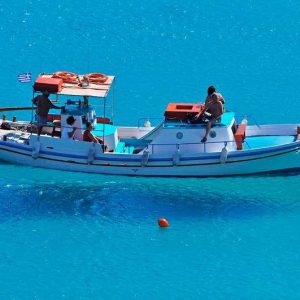 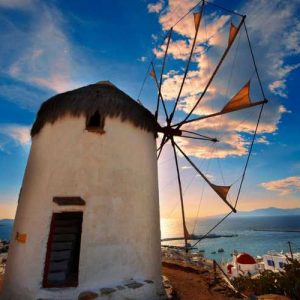 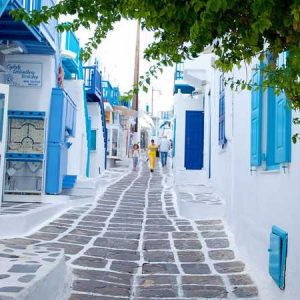 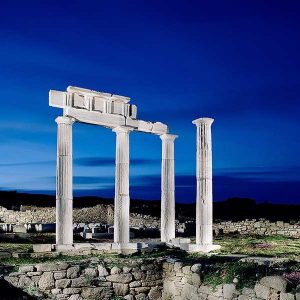 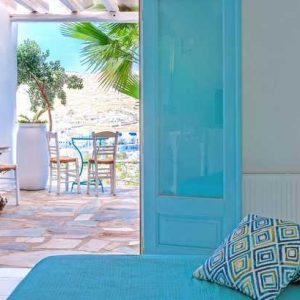 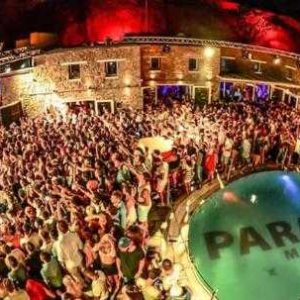 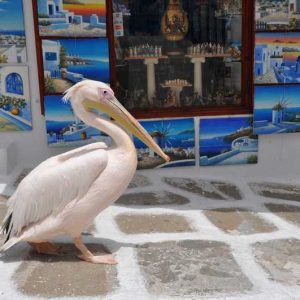 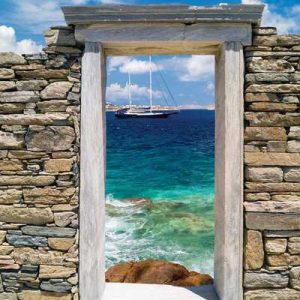 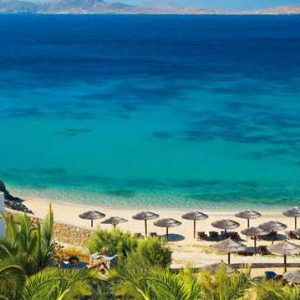 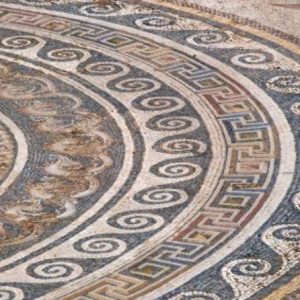 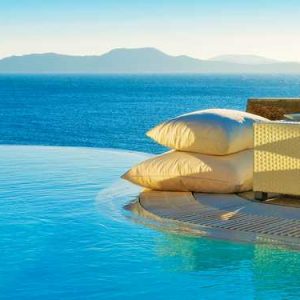 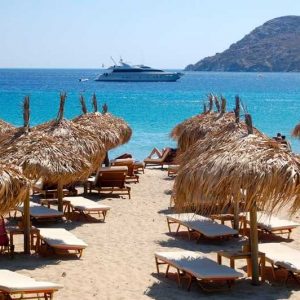 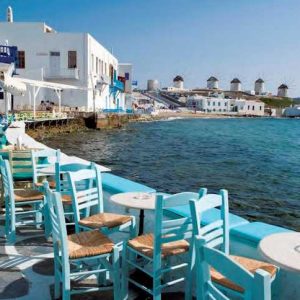 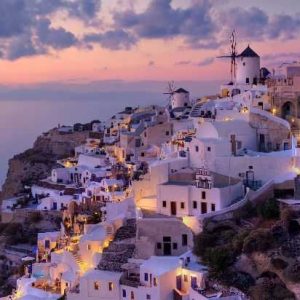 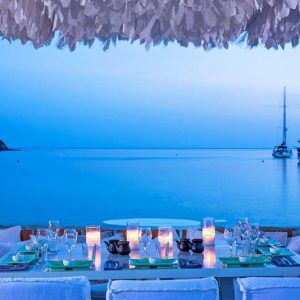 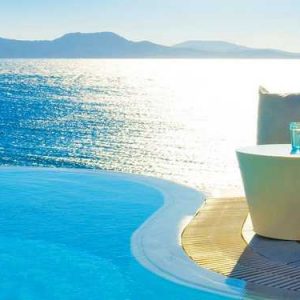 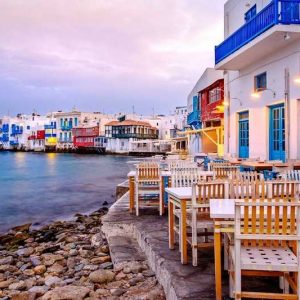 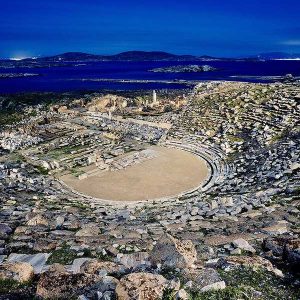 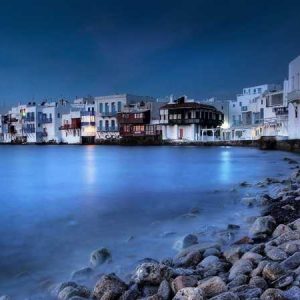 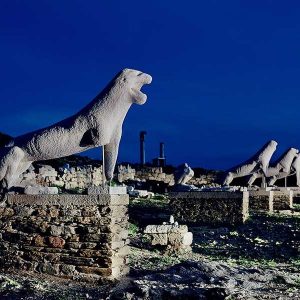 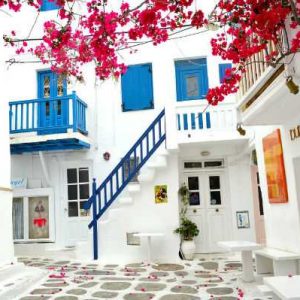 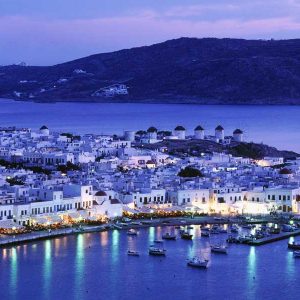 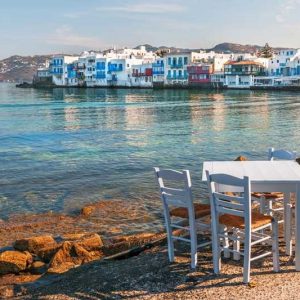 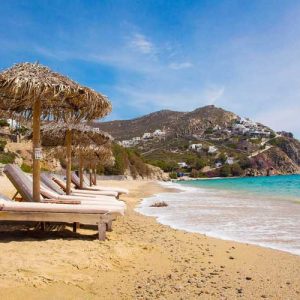 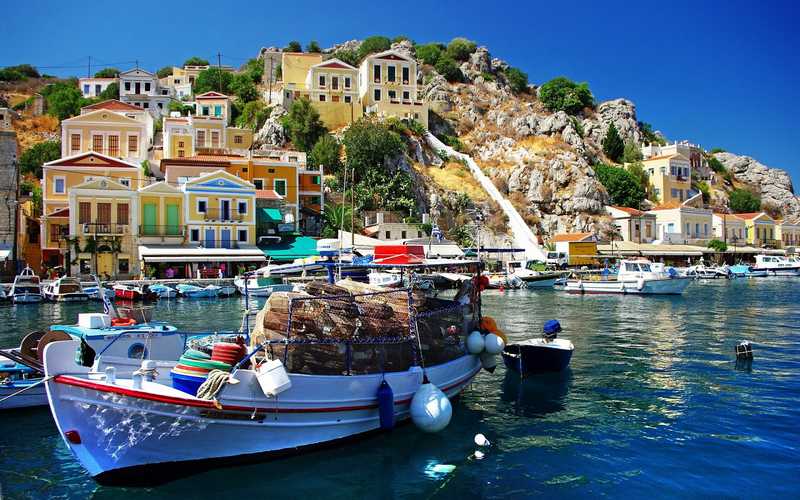 The Aegean Sea (Greek: Αιγαίο Πέλαγος) is an elongated embayment of the Mediterranean Sea located between the Greek and Anatolian peninsulas, i.e., between the mainlands of Greece and Turkey. In the north, it is connected to the Marmara Sea and Black Sea by the Dardanelles and Bosphorus. The Aegean Islands are within the sea and some bound it on its southern periphery, including Crete and Rhodes.

The sea was traditionally known as Archipelago (in Greek, Αρχιπέλαγος, meaning “chief sea”), but in English this word’s meaning has changed to refer to the Aegean Islands and, generally, to any island group.

In ancient times, there were various explanations for the name Aegean. It was said to have been named after the Greek town of Aegae, or after Aegea, a queen of the Amazons who died in the sea, or Aigaion, the “sea goat”, another name of Briareus, one of the archaic Hecatonchires, or, especially among the Athenians, Aegeus, the father of Theseus, who drowned himself in the sea when he thought his son had died. 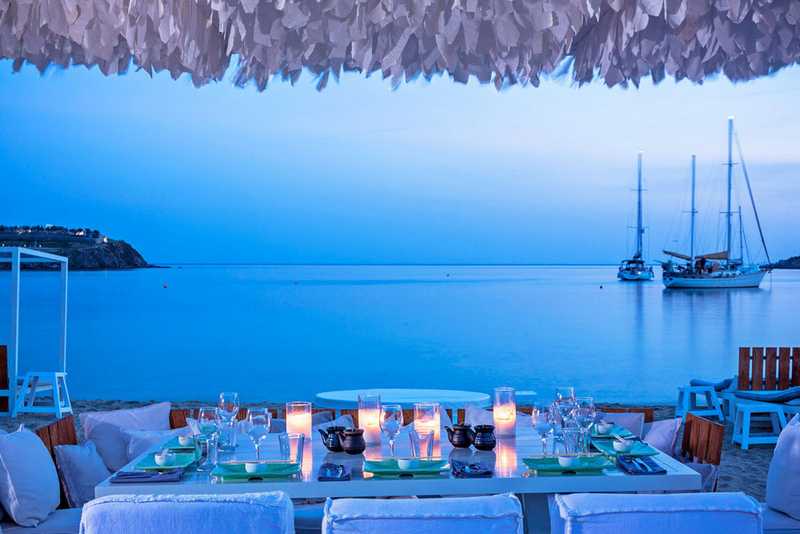 The Venetians, who ruled many Greek islands in the High and Late Middle Ages, popularized the name Archipelago (Greek for “main sea” or “chief sea”), a name that held on in many European countries until the early modern period.

The Aegean Sea covers about 214,000 square kilometres (83,000 sq mi) in area, and measures about 610 kilometres (380 mi) longitudinally and 300 kilometres (190 mi) latitudinally. The sea’s maximum depth is 3,543 metres (11,624 ft), east of Crete. The Aegean Islands are found within its waters, with the following islands delimiting the sea on the south (generally from west to east): Kythera, Antikythera, Crete, Kasos, Karpathos and Rhodes.

The word archipelago was originally applied specifically to the Aegean Sea and its islands. Many of the Aegean Islands, or chains of islands, are actually extensions of the mountains on the mainland. One chain extends across the sea to Chios, another extends across Euboea to Samos, and a third extends across the Peloponnese and Crete to Rhodes, dividing the Aegean from the Mediterranean.

The bays and gulfs of the Aegean beginning at the South and moving clockwise include on Crete, the Mirabello, Almyros, Souda and Chania bays or gulfs, on the mainland the Myrtoan Sea to the west with the Argolic Gulf, the Saronic Gulf northwestward, the Petalies Gulf which connects with the South Euboic Sea, the Pagasetic Gulf which connects with the North Euboic Sea, the Thermian Gulf northwestward, the Chalkidiki Peninsula including the Cassandra and the Singitic Gulfs, northward the Strymonian Gulf and the Gulf of Kavala and the rest are in Turkey; Saros Gulf, Edremit Gulf, Dikili Gulf, Gulf of Çandarlı, Gulf of İzmir, Gulf of Kuşadası, Gulf of Gökova, Güllük Gulf.
Extent

The International Hydrographic Organization defines the limits of the Aegean Sea as follows:

On the South. A line running from Cape Aspro (28°16’E) in Asia Minor, to Cum Burnù (Capo della Sabbia) the Northeast extreme of the Island of Rhodes, through the island to Cape Prasonisi, the Southwest point thereof, on to Vrontos Point (35°33’N) in Skarpanto [Karpathos], through this island to Castello Point, the South extreme thereof, across to Cape Plaka (East extremity of Crete), through Crete to Agria Grabusa, the Northwest extreme thereof, thence to Cape Apolitares in Antikithera Island, through the island to Psira Rock (off the Northwest point) and across to Cape Trakhili in Kithera Island, through Kithera to the Northwest point (Cape Karavugia) and thence to Cape Santa Maria (36°28′N 22°57′E) in the Morea.
In the Dardanelles. A line joining Kum Kale (26°11’E) and Cape Helles.

Aegean surface water circulates in a counter-clockwise gyre, with hypersaline Mediterranean water moving northward along the west coast of Turkey, before being displaced by less dense Black Sea outflow. The dense Mediterranean water sinks below the Black Sea inflow to a depth of 23–30 metres (75–98 ft), then flows through the Dardanelles Strait and into the Sea of Marmara at velocities of 5–15 cm/s. The Black Sea outflow moves westward along the northern Aegean Sea, then flows southwards along the east coast of Greece.

The physical oceanography of the Aegean Sea is controlled mainly by the regional climate, the fresh water discharge from major rivers draining southeastern Europe, and the seasonal variations in the Black Sea surface water outflow through the Dardanelles Strait.

Analysis of the Aegean during 1991 and 1992 revealed 3 distinct water masses: 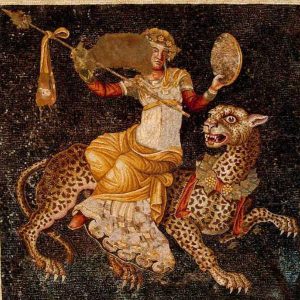 History
Ancient History
The current coastline dates back to about 4000 BC. Before that time, at the peak of the last ice age (c. 16,000 BC) sea levels everywhere were 130 metres lower, and there were large well-watered coastal plains instead of much of the northern Aegean. When they were first occupied, the present-day islands including Milos with its important obsidian production were probably still connected to the mainland. The present coastal arrangement appeared c. 7000 BC, with post-ice age sea levels continuing to rise for another 3,000 years after that.

The subsequent Bronze Age civilizations of Greece and the Aegean Sea have given rise to the general term Aegean civilization. In ancient times, the sea was the birthplace of two ancient civilizations – the Minoans of Crete and the Mycenean Civilization of the Peloponnese.

Later arose the city-states of Athens and Sparta among many others that constituted the Athenian Empire and Hellenic Civilization. Plato described the Greeks living round the Aegean “like frogs around a pond”. The Aegean Sea was later invaded by the Persians and the Romans, and inhabited by the Byzantine Empire, the Bulgarians, the Venetians, the Genoese, the Seljuq Turks, and the Ottoman Empire. The Aegean was the site of the original democracies, and its seaways were the means of contact among several diverse civilizations of the Eastern Mediterranean.
Modern history
Economy and politics
Many of the islands in the Aegean have safe harbours and bays. In ancient times, navigation through the sea was easier than travelling across the rough terrain of the Greek mainland (and to some extent the coastal areas of Anatolia). Many of the islands are volcanic, and marble and iron are mined on other islands. The larger islands have some fertile valleys and plains. Of the main islands in the Aegean Sea, two belong to Turkey – Bozcaada (Tenedos Τένεδος) and Gökçeada (Imbros Ίμβρος); the rest belong to Greece. Between the two countries, there are political disputes over several aspects of political control over the Aegean space, including the size of territorial waters, air control and the delimitation of economic rights to the continental shelf.