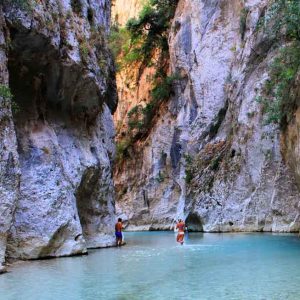 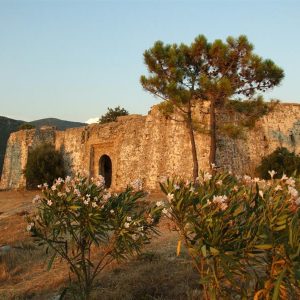 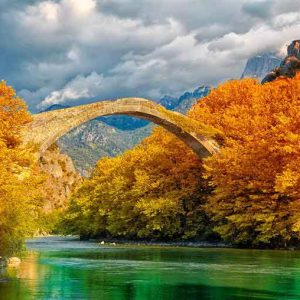 Time moves more slowly in Epirus, preoccupied as it is with the lofty, brooding Pindos Mountains that make up its inland mass. For thousands of years, these mountains have safeguarded civilisations and confounded invaders. Part of this towering expanse, centred around the stunning 12km-long Vikos Gorge – said to be the world’s deepest – is now a national park. The park is filled out with leafy forests, waterfalls and ice-cold mountain lakes, and surrounded by immaculate traditional villages of stone and slate, known as the Zagorohoria. Compared with Epiros’ mountains, the western coast is just an afterthought, though it is a lovely one with long stretches of sand punctuated by archaeological and historical sites. As with the Ionian Islands just opposite, centuries of Venetian rule have given the Epírot coast an Italian flavour, and in August
voluble young Italians do indeed arrive to hit the beaches and bars of Epiros’ microresort, Parga, with many other Greek and international
partiers.

Getting to Epirus is an event in itself. The main road, whether it be from Kozani in Macedonia or from Kalambaka in Thessaly, winds up over the Pindos Mountains, except for when it cuts straight through them, inside the massive tunnels created for the Egnatia Odos cross-country highway.
Indeed, while Epirus has suffered millennia of isolation due to its geography, the completion of this grand project – expected by early 2009 – will make getting there easier. With capital city Ioannina flourishing, and the main coastal and mountain destinations attracting more international
attention, it looks like Epirus’ moment has finally come.