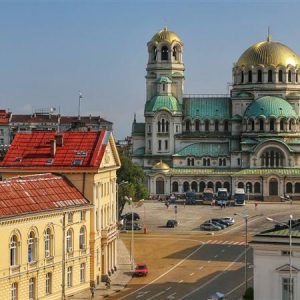 Sofia is Bulgaria’s capital and its largest city. Founded thousands of years ago, today the city continues to develop as the country’s cultural and economic center. At present, the city has a population of 1,250,000.

Sofia is located in the western part of the country, on The Sofia Plain and on the lower slopes of Mount Vitosha. The city’s average altitude is 550 meters above sea level, the climate is moderate and continental, characterized by cold winters and relatively cool summers. The average temperature in January is 1 degree below zero Centigrade, and the average July temperature is 20 degrees Centigrade.

The city is located at a strategic crossroads. The route from Western Europe to Istanbul passes through Sofia via Beograd and Skopje, then through Plovdiv to Turkey. Sofia also connects The Near East and The Middle East, lying between the banks of The Danube and the shores of The White Sea on the one hand, and between The Black Sea and The Adriatic on the other.

Three freeways begin in Sofia: Trakia, Lyulin, and Hemus. The Sofia Airport provides travelers with convenient connections to all major European cities, and from the central train station and bus station passengers can reach every destination in the country.

Sofia preserves many valuable monuments to its long and storied past. Visitors exploring the city’s streets can see remnants of The Eastern Gate from the days when Sofia was Serdika and Sredets, dating from the 2nd-4th centuries CE. These remains are exhibited in the underpass connecting the Presidential Palace and The Ministerial Council, surrounded by shops selling traditional Bulgarian souvenirs and rosewater.