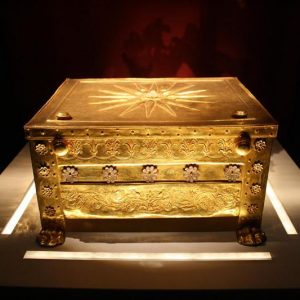 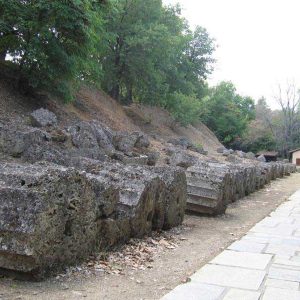 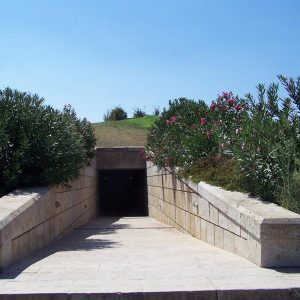 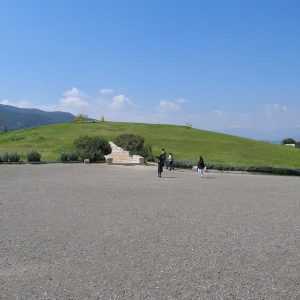 Vergina (ver-yee-nah), 11km southeast of Veria, is the legendary burial site of the Macedonian kings, and their first capital (ancient Aigai).
In 336 BC, at the wedding of his daughter Cleopatra, Philip II was assassinated here. At least the guests were already there.
This World Heritage–listed site is also called the Royal Tombs. A walkway through the darkened interior of the major tumulose (tholos) leads to the four individual tombs. Tomb I is called Persephone’s Tomb, after a mural found inside depicting Hades’ rape of Persephone. Tomb II probably belonged to Philip II. Intact until its
discovery in 1977, the tomb yielded a gold larnax (ossuary) with bones. The sixteen-pointed star of the royal Macedonian family on the larnax lid, and damage to the skull identical with descriptions of an injury Philip sustained, pointed to its likely inhabitant. Philip’s larnax and that of his presumed concubine or wife, plus some exquisite gold-leaf diadems, are displayed in the exhibition rooms. Tomb III was probably designated for Alexander IV, son of Alexander the Great, while the mysterious Tomb IV was looted in antiquity. To see the rest of the site, continue 400m past the Royal Tombs to the ruins of an extensive palatial complex, summer residence of 3rd-century-BC king Antigonos Gonatas. The main attraction is a large Doric peristyle, surrounded by floors of pebble-mosaic; the most beautiful has geometric floral design. Aside from the site, there’s no reason to linger, though Vergina does have a few pensions.