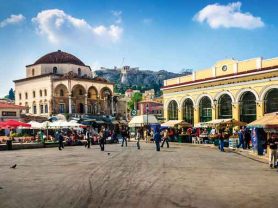 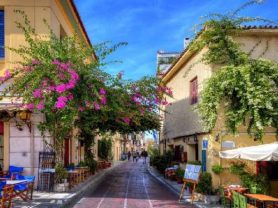 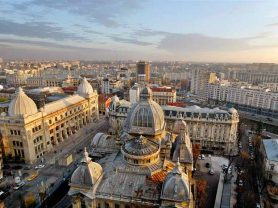 DAY 1 ATHENS
Arrival at Athens International Airport. Meet and greet with our representative and transfer to the hotel. High tea and check-in at the hotel. Rest of the day at leisure. For your first evening in Athens we suggest you an “Athens by Night” orientation tour followed by a folklore dance show with dinner that will offer you unforgettable moments and memories. Later you can explore the numerous must-visit nightlife hotspots in the centre of Athens. Athens, a city that never sleeps, promises to the lovers of nightlife an amazing and unique experience. Overnight in the hotel.

DAY 3 ATHENS – BUCHAREST
After breakfast transfer to Athens International Airport for our flight to Bucharest. Arrival at Bucharest Henri Coandă International Airport. Meet and greet with our representative and transfer to the hotel. High tea and check-in at the hotel. The rest of the day is at your leisure to discover the charms of the city. Bucharest is the capital and largest city of Romania. It is located in the southeast of the country, on the banks of the Dambovita River, less than 60 km north of the Danube River and the Bulgarian border. Known for its wide, tree-lined boulevards, glorious Belle Époque buildings and a reputation for the high life which in the 1900s earned its nickname of “Little Paris”, Bucharest is today a bustling metropolis. We suggest you to stroll and explore the Old City Centre, the beating heart of Bucharest, with its fashionable boutique stores, splendid high-end restaurants and cozy bars, all crammed up on picturesque, narrow streets. Lovers of nightlife will also find here numerous must-visit nightlife hotspots that will offer you an one-of-a-kind nightlife experience. Overnight at the hotel.

DAY 4 BUCHAREST CITY TOUR
After breakfast we will proceed for a panoramic city tour of Bucharest. During this half-day tour we will guide you around the many twists and turns of the historical center of Bukharest and introduce you to its charm and elegance, as well as its major attractions. The history of Bucharest is reflected in an exciting architectural mix of different eras and styles, including neo-classical, interbellum (Bauhaus and art deco), communist-era and modern style architecture. On our tour we will discover the best of what the city has to offer: the University Square, the Romana Square, the Victory Square, the Arch of Triumph, the House of the Free Press and the Romanian Atheneum. We will also stop over at the Constitution Square to admire the Palace of Parliament – the world’s largest, heaviest and most expensive administrative building – as well as at the Revolution Square, the place which marked the end of the communist period in December 1989. Transfer back to the hotel. Rest of the day at leisure.

DAY 5 DEPARTURE
After breakfast you will be transfered to Bucharest Henri Coandă International Airport for your international flight back to India.

Group Itinerary Explore the Little Paris of the East and the House of Dracula!

Romania is situated in the north of the Balkan Peninsula on the western shores of the Black Sea. It enjoys great natural beauty and diversity and a rich cultural heritage. Romania enchants visitors with its scenic mountain landscapes and unspoiled countryside areas, and also with its historic cities and its busy capital. Over the last
Company : CEL Tours s.a.
Website : http://www.greecel.com
Aggregate Review : Επιστολές ταξιδιωτών μας 5 out of 5 , 18 votes , 18 reviews
Thank you once again to all your team
Archana
06/07/2017