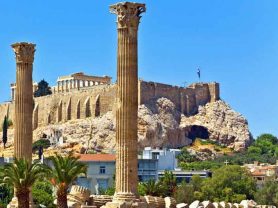 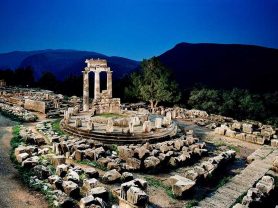 Day 1 ATHENS
Arrival at Athens International Airport. Meet and greet with driver and transfer to the hotel. Check in and afternoon at leisure. For your first night we propose you an unforgettable folklore dinner. Back to the hotel. Overnight in Athens.

Day 2 ATHENS CITY TOUR
Early breakfast & pick up from hotel for Athens city tour. You’ll see the Panathenaic Stadium where the first Olympic Games of modern times were held in 1896 (short stop). Continue and pass by the Prime Minister’s residence (Ex Royal Palace) guarded by the Evzones in their colorful uniform, the Temple of Olympian Zeus, the Hadrian’s Arch, the Parliament and the memorial to the Unknown soldier, the Academy, the University, the National Library, The Constitution Square (Syntagma). Arrive in Acropolis and visit the Architectural Masterpieces of Golden Age of Athens: The Propylaea, the Temple of Athena Nike, the Erechtheion and finally the harmony between material and spirit, the Monument that “puts order in the mind” , the Parthenon. In the afternoon we suggest the Cape Sounio tour.

Day 3 FULL DAY TOUR TO DELPHI
After breakfast, drive through the fertile plain of Beotia, crossing the towns of Thebes connected with the tragedy of King Oedipus – Levadia and Arachova (short stop on the way back).
Arrive at Delphi, the center of Ancient World – the “Omphalos” (Navel of Earth) – whose prestige extended far beyond the boundaries of the Hellenic World.
On the slopes of Mount Parnassus, in a landscape of unparalleled beauty and majesty, lie the ruins of the Sanctuary of Apollo Pythios.
Visit the Treasury of the Athenians, the Temple of Apollo and the Museum containing such masterpieces of Ancient Greek sculpture as the bronze Charioteer and the famous athlete Aghias. Lunch in the modern village of Delphi, return to Athens by the same route. Afternoon free time for leisure in Athens and overnight.

Day 4 ATHENS – SANTORINI
After breakfast at the hotel, transfer to the Piraeus port and sailing to Santorini. Arrive at Santorini island. Meet and greet with our representative and transfer to the hotel. Santorini is awesome island with magneficent views and places to be. Afternoon is free at leisure.

Day 5 SANTORINI VOLCANO – HOT SPRINGS
After breakfast proceed to Volcano and Hot Springs tour. Sail from the old port of Fira to the volcano of Santorini in Nea Kameni Island! There you have the chance to climb on the top of the volcano, see the crater which is still active and walk on its rims! Before the boat returns at the old port of Fira, the excursion continues to Palia Kameni Island, where you can have the experience of a lifetime, swim in the hot springs created thousands of years ago by the power of the volcano.

Day 6 SANTORINI – ATHENS
Breakfast and in the afternoon you will be transferred to Santorini’s port and sailing to Athens, then be transferredto hotel.

Day 7 AIRPORT
Breakfast at the hotel and then be transferred to the airport for your international flight.

SIC round trip transfers in Athens from airport – hotel - port

SIC roundtrip transfers in Santorini from port to hotel

Drinks of any kind

2 euro entrance fee to the Volcano

Porterage at hotels or airport

Tours not mentioned at the above services

Athens is the capital and largest city of Greece. Dominates the Attica region and is one of the world’s oldest cities. With its recorded history spanning around 3,400 years. Classical Athens, as a landlocked location was a powerful city-state that emerged in conjunction with the seagoing development of the port of Piraeus. A centre for
Company : CEL Tours s.a.
Website : http://www.greecel.com
Aggregate Review : Επιστολές ταξιδιωτών μας 5 out of 5 , 18 votes , 18 reviews
Thanks to your amazing services
Tech Mahindra
11/11/2016   Greece