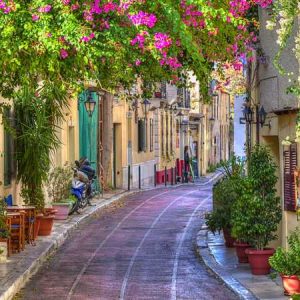 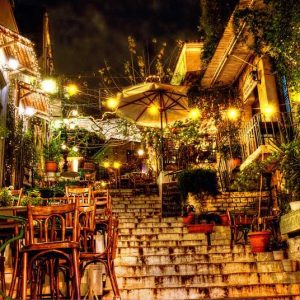 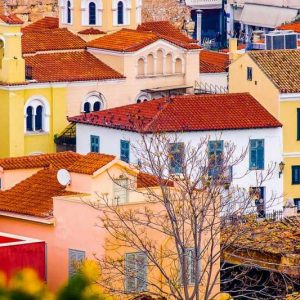 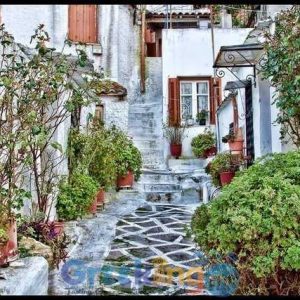 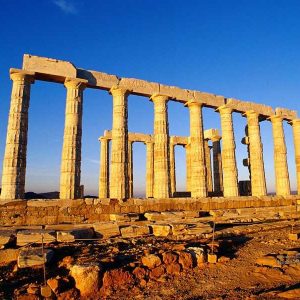 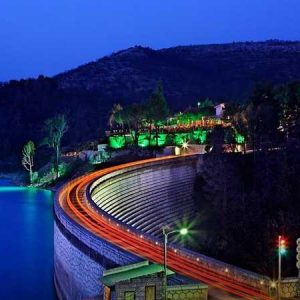 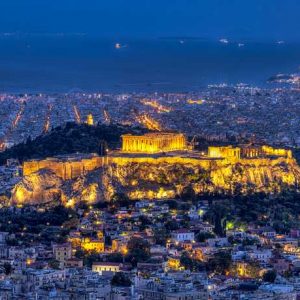 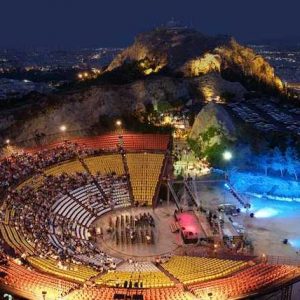 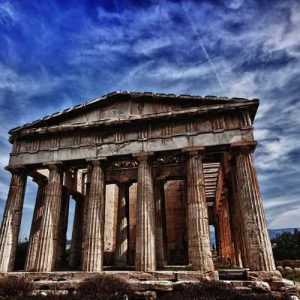 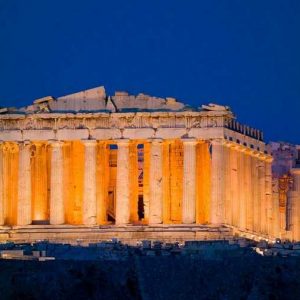 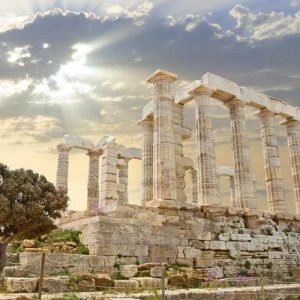 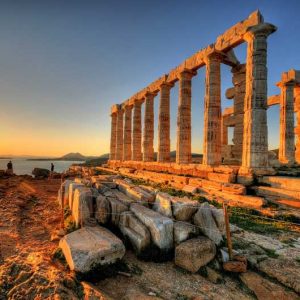 Attica (Greek: Ἀττική) is a historical region that encompasses the city of Athens, the capital of Greece. The historical region is centered on the Attic peninsula, which projects into the Aegean Sea. The modern administrative region of Attica is more extensive than the historical region and includes the Saronic Islands, Cythera, and the municipality of Troizinia on the Peloponnesian mainland. The history of Attica is tightly linked with that of Athens, which, from the classical period, was one of the most important cities in the ancient world.

Lake Marathon
Attica is a triangular peninsula jutting into the Aegean Sea. It is naturally divided to the north from Boeotia by the 10 mi (16 km) long Kithairon mountain range. To the west, it is bordered by the sea and the canal of Corinth. The Saronic Gulf lies to the south, and the island of Euboea lies off the north and the eastern coasts. Mountains separate the peninsula into the plains of Pedias, Mesogaia, and Thriasion. The mountains of Attica are the Hymettus, the eastern portion of the Geraneia, the Parnitha (the highest mountain of Attica), the Aigaleo and the Penteli. Four mountains—Aigaleo, Parnitha, Penteli and Hymettus (clockwise from the southwest)—delineate the hilly plain on which the Athens-Piraeus metroplex now spreads. The plain of Mesogaía, now called Mesógeia, lies to the east of Mount Hymettus and is bound to the north by the foothills of Mount Penteli, to the east by the Euboean Gulf and Mount Myrrhinous (modern Merenta), and to the south by the mountains of Laurium (modern Lavrio). Athens’ water reservoir, Lake Marathon, is an artificial lake created by damming in 1920. Pine and fir forests cover the area around Parnitha. Hymettus, Penteli, Myrrhinous and Laurium are forested with pine trees, whereas the rest are covered by shrubbery.
The Kifisos is the longest river of Attica.
According to Plato, Attica’s ancient boundaries were fixed by the Isthmus, and, toward the continent, they extended as far as the heights of Cithaeron and Parnes. The boundary line came down toward the sea, bounded by the district of Oropus on the right and by the river Asopus on the left.

The Temple of Poseidon (c.440 B.C.) at Cape Sounion, the southernmost point of Attica.
During antiquity, the Athenians boasted about being ‘autochthonic’, which is to say that they were the original inhabitants of the area and had not moved to Attica from another place. The traditions current in the classical period recounted that, during the Greek Dark Ages, Attica had become the refuge of the Ionians, who belonged to a tribe from the northern Peloponnese. Supposedly, the Ionians had been forced out of their homeland by the Achaeans, who had been forced out of their homeland by the Dorian invasion.Supposedly, the Ionians integrated with the ancient Atticans, who, afterward, considered themselves part of the Ionian tribe and spoke the Ionian dialect. Many Ionians later left Attica to colonize the Aegean coast of Asia Minor and to create the twelve cities of Ionia.
During the Mycenaean period, the Atticans lived in autonomous agricultural societies. The main places where prehistoric remains were found are Marathon, Rafina, Nea Makri, Brauron, Thorikos, Agios Kosmas, Eleusis, Menidi, Markopoulo, Sparta, Aphidnae and Athens. All of these settlements flourished during the Mycenaean period. According to tradition, Attica comprised twelve small communities during the reign of Cecrops, the legendary Ionian king of Attica, and these were later incorporated in an Athenian state during the reign of Theseus, the mythical king of Athens. Modern historians consider it more likely that the communities were progressively incorporated into an Athenian state during the 8th and the 7th centuries BC.
Until the 6th century BC, aristocratic families lived independent lives in the suburbs. Only after Peisistratos’s tyranny and the reforms implemented by Cleisthenes did the local communities lose their independence and succumb to the central government in Athens. As a result of these reforms, Attica was divided into approximately a hundred municipalities, the demes (dēmoi, δῆμοι), and also into three large sectors: the city (ἄστυ), which comprised the areas of central Athens, Ymittos, Aegaleo and the foot of Mount Parnes, the coast (παράλια), that included the area between Eleusis and Cape Sounion and the area around the city (ἐσωτερικό-μεσογαία), inhabited by people living on the north of Mount Parnitha, Penteliko and the area east of the mountain of Hymettus. Principally, each civic unit would include equal parts of townspeople, seamen, and farmers. A “trittýs” (“third”) of each sector constituted a tribe. Consequently, Attica comprised ten tribes.
Fortresses
During the classical period, Athens was fortified to the north by the fortress of Eleutherae, which is preserved well. Other fortresses are those of Oenoe, Decelea and Aphidnae. To protect the mines at Laurium, on the coast, Athens was fortified by the walls at Rhamnus, Thoricus, Sounion, Anavyssos, Piraeus, and Eleusis.
Places of worship
Even though archaeological ruins are found in nearly the whole area of Attica, the most important are those found in Eleusis. The worship of the goddesses Demeter and Cora, beginning in the Mycenaean period, continued until the late years of antiquity.
Many other types of worship can be traced to the prehistory. For example, the worship of Pan and the Nymphs was common in many areas of Attica such as Marathon, Parnes and Ymittos. The god of wine, Dionysus, was worshipped mainly in the area of Icaria, now the suburb of Dionysus. Iphigeneia and Artemis were worshipped in Brauron, Artemis in Rafina, Athena on Sounion, Aphrodite on Iera Odos, and Apollo in Daphne.
The festival of Chalceia was celebrated every autumn in Attica. The festival honored the gods Hephaestus and Athena Ergane.
Medieval period
After the period of antiquity, Attica came under Roman, Byzantine, Venetian, and Ottoman rule. During the Byzantine period, Athens was invaded by the Goths under the commands of Alaric in 396 AD. Attica’s population diminished in comparison to the neighboring area of Boeotia.
The sites of historical interest date to the 11th and 12th centuries, when Attica was under the rule of the Franks. The great monastery of Dafni, that was built under Justinian I’s rule, is an isolated case that does not signify a widespread development of Attica during the Byzantine period. On the other hand, the buildings built during the 11th and 12th centuries show a greater development that continued during the rule of the Franks, who did not impose strict rule.
During the Ottoman rule, Athens enjoyed some rights. However, that was not the case for the villages of Attica. Great areas were possessed by the Turks, who terrorized the population with the help of spahis. The monasteries of Attica played a crucial role in preserving the Greek element of the villages.
In spite of its conquerors, Attica managed to maintain its traditions. This fact is proved by the preservation of ancient toponyms such as Oropos, Dionysus, Eleusis, and Marathon. During the Greek War of Independence, the peasants of Attica were the first to revolt (April 1821), and they occupied Athens and seized the Acropolis that was handed over to the Greeks in June, 1822.
Attica after 1829
Attica has, since 1829, belonged to the independent Greek state. From 1834, Athens was refounded and made the new Greek capital (moved from Nafplio in Argolis), and people from other parts of Greece gradually began to repopulate Attica. The most dramatic surge came with Greek refugees from Anatolia following the population exchanges between Greece and Turkey under the Treaty of Lausanne. Today, much of Attica is occupied by urban Athens. The modern Greek region of Attica includes classical Attica as well as the Saronic Islands, a small part of the Peloponnese around Troezen, and the Ionian Island of Cythera.
Climate
Attica enjoys a Mediterranean climate. It has a distinct, long, dry period in the summer and a short, wet period in the winter. The highest precipitation is experienced during the winter months. The southern part of the peninsula has a hot, semi-arid climate.